The refurbishment project of Puistokatu 4, which began in autumn 2020, has now been completed. In this article, the architect, contractor and conservator tell us about the complex project, carried out with utmost dedication and precision under the painted ceilings that are more than a hundred years old.

When Joonas Jaatinen, representative of Rakennus Oy Antti J. Ahola, the main contractor of Puistokatu 4, arrived to his future worksite for the first time in September 2020, he saw a house that was past its prime.

“The place was very run-down, like a derelict house,” says Jaatinen, chief supervisor of the Puistokatu 4 worksite.

“No big deal. Little by little, we started to fix the place. We just set up the site huts and got to work.”

The house has seen three centuries

The first version of Puistokatu 4 was completed 140 years ago, as Carl Henrik Nummelin, engineer and cartographer, had the house built for himself in the late 1870s. However, it was soon completely destroyed by fire in 1886.

The villa, as it is now, was erected on the same site in the early 1890s. The new inhabitants were Ida Aalberg, the most famous actress of her time, and her spouse, lawyer Lauri Kivekäs. The drawings were made by architect Josef Stenbäck, Kivekäs’ brother who moved into the villa as well.

After being a private residence for a few decades, the villa was converted into a school building in 1916. At first, it housed the private Svenska Samskolan school and then the French school and kindergarten. 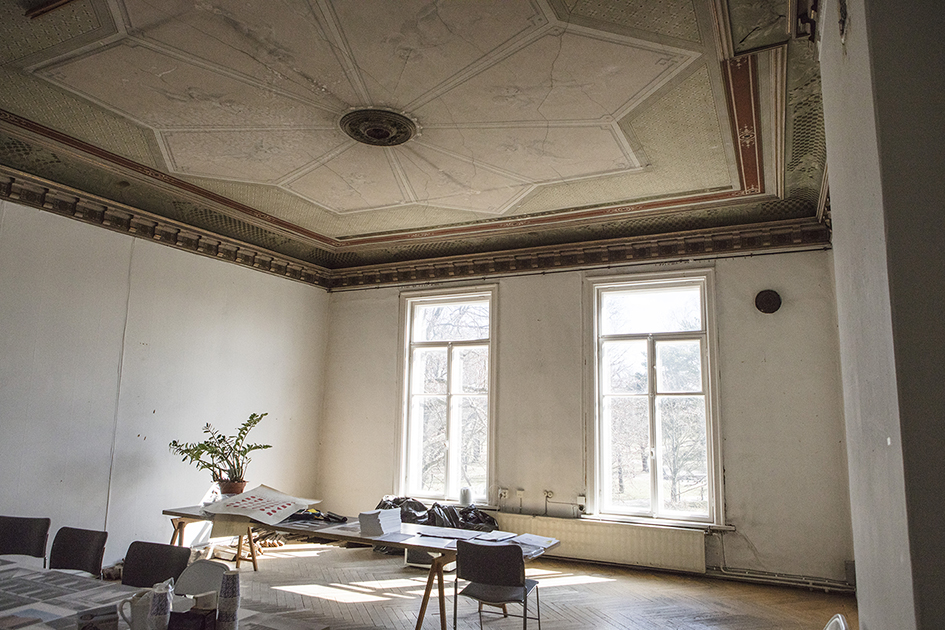 By the 2000s, the house began to show signs of ageing, as it suffered from moisture damage and decay in the structures. The extensive refurbishment that the house required was too costly for the Museum of Finnish Architecture, and eventually they moved out.

The building stood almost empty for years on end, and nobody seemed to want it, until in January 2020, the Tiina and Antti Herlin Foundation acquired the wooden villa for the purpose of establishing a house of science and hope, together with  the Maj and Tor Nessling Foundation.

“When Minttu (Minttu Jaakkola, Research Director at the Nessling Foundation) and I opened the door to Puistokatu 4 for the first time in November 2019, we realised immediately that this was what we had been looking for. We want to invite to this house people from various sectors of society to discuss and build an ecologically sustainable future for all,” says Anna Herlin, Head of Development at the Tiina and Antti Herlin Foundation.

Among others, SARC Architects was consulted in connection with the purchase of the house, and in the end, they were selected to prepare the designs for the refurbishment.

“Together with the two foundations, we discussed the future we would like to see in the house, and whether this building could be modified to meet their needs. We thought that it would be a perfect match for the activities not to build anything new, but to save a valuable property that had reached the point in its lifecycle of most likely being lost for good without renovation,” says Sarlotta Narjus, Managing Director of SARC.

Preparations for the project took the most part of the following year: the refurbishment plans were drawn up, contractors invited to tender, and permits obtained. The extremely challenging refurbishment project of the house, that comprises 920 square metres on three floors, finally began in autumn 2020. Now, almost two years later, it is finally close to completion.

When the renovation of the Puistokatu property began in 2020, the first task was to take down the roof that had suffered severe damage and was leaking. At the same time, structural work began in the attic alongside façade restoration. The weather-worn façades on the sides of Kaivopuisto park and the sea were taken down, while paint was stripped away from the outer walls on Puistokatu side.

The building had to be carefully reinforced. New staircases were cast, ornamental ceilings moved, the floors opened and demolished.

“Some of the structures had to be pulled down quite massively to keep the house in shape,” says Sarlotta Narjus. 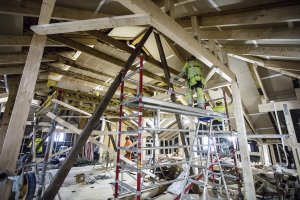 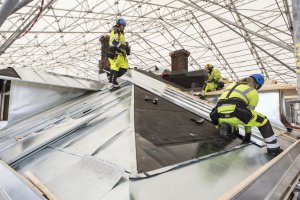 The starting point for the refurbishment has been not only to ensure that the building becomes safe and durable, but also to expose as much of its history as possible. The aim of the renovation was not to restore the former splendour of the house but to leave the numerous layers and the ravages of time visible.

The fundamental idea of the new owners is to make Puistokatu 4 into an open, living space for the people of Helsinki, with every nook and cranny offering a different glimpse into the history of the villa.

“I have not seen such large-scale conservation on any of my previous building sites. The conservators have played a major role in this project, says Joonas Jaatinen, chief supervisor of the worksite. 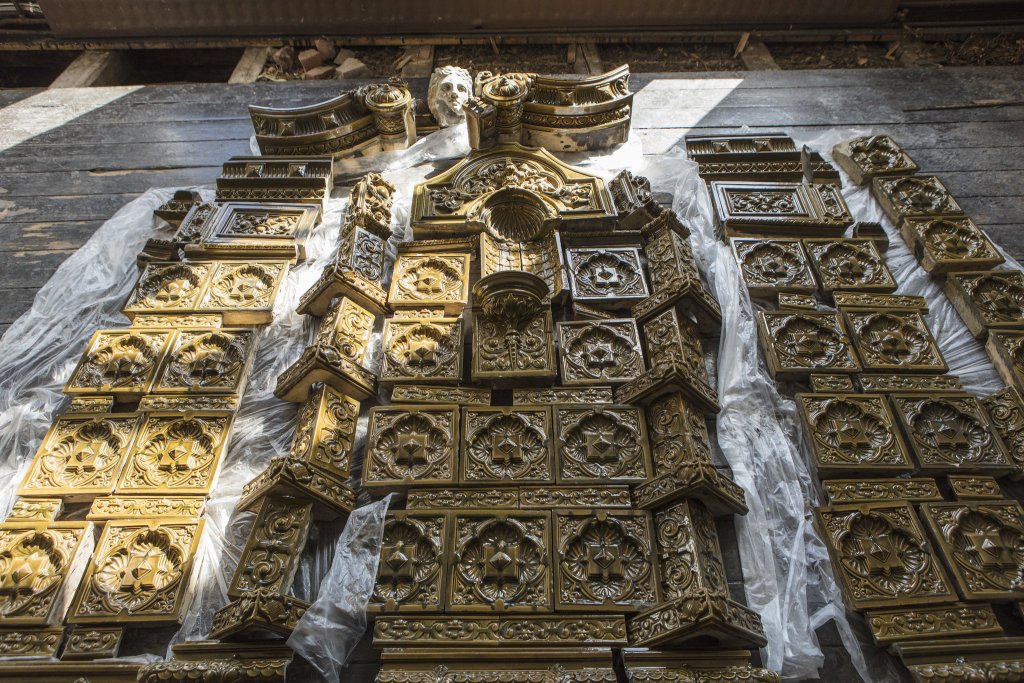 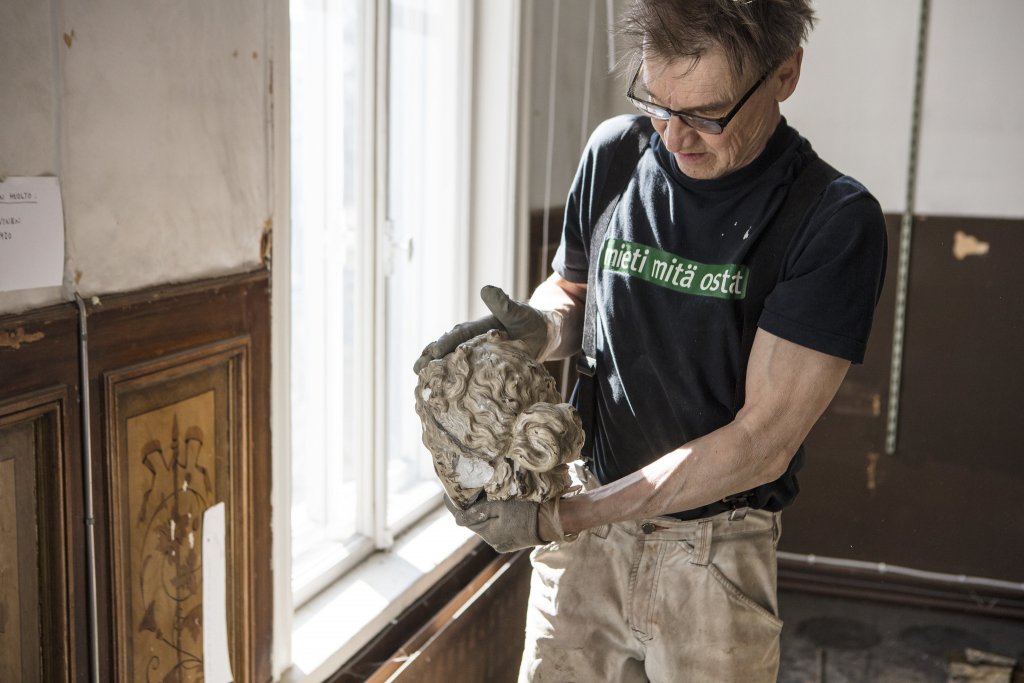 Conservation work began at Puistokatu in February 2022, with conservation and restoration company Kollaasi in charge.

“For us, this house has been a treasure trove. Initially, we thought that only a few ornaments have been preserved, but eventually, they were all around the place. It may well be that this site will remain unequalled during my career,” says Hanna Rotonen, interior conservator from Kollaasi.

The style of the former residents is particularly visible on the second floor of the house. Actress Ida Aalberg commissioned spectacular ceiling paintings from an unknown artist for her home. Some of them remain untouched to this day.

The main focus of the conservators has been to preserve these ornamental Neo-Renaissance ceilings, presumed to originate from the 1800s. The new owners’ wish to leave things rough has been taken into account when the painted ceilings were repaired.

“We only restored the ceilings to an extent that draws attention to the paintings and not, for example, to the water damage. The cracks were not fully faded out but left visible on purpose,” says Rotonen.

Not all ornamental ceilings in Puistokatu 4, which includes hundreds of concealed ornamental details, are visible today. New primer has been painted on top of some of the ornamental paintings over the decades. For now, the decision was to leave these ceilings as they are, because the risk of causing damage to the original paintings would have been too high if the paint on top had been scratched off.

“These ornaments remain under the layers of paint. In a way, the previous owners’ lack of renovation funds has been a blessing, as some of the ornaments have been preserved because the desired modernisation has not been possible,” Rotonen says. 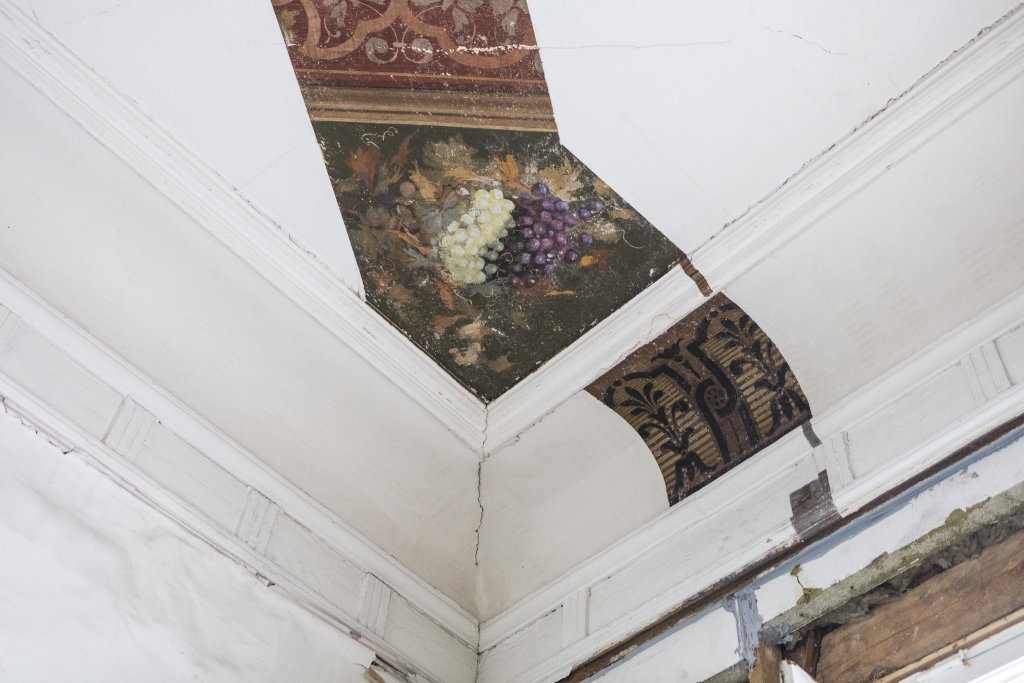 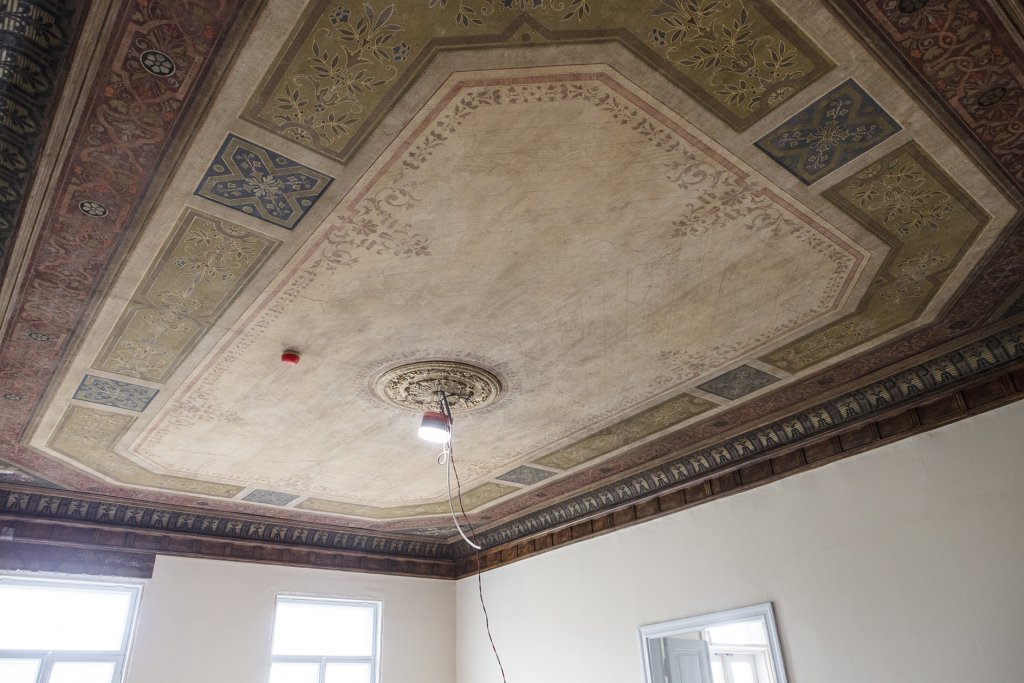 Work contribution by hundreds of people

Even though the conservators had the honour of treasuring perhaps the most spectacular features of Puistokatu 4 worksite, they were only one piece of the gigantic puzzle.

Hundreds of workers have visited the worksite during the project. At the last stages of the renovation, it was quite common that up to sixty people were at work on site at the same time.

Jaatinen has shared the operational responsibility for the worksite with senior supervisor Lauri Koponen and supervisor Juha Luolakari. He gives equal praise to his closest colleagues and to everyone having worked in Puistokatu over the years.

“I am extremely grateful to everyone involved in this project. I’m happy for the opportunity to work with such a fantastic, skilled team. Team spirit has been strong both in the house itself, and in the site hut.” 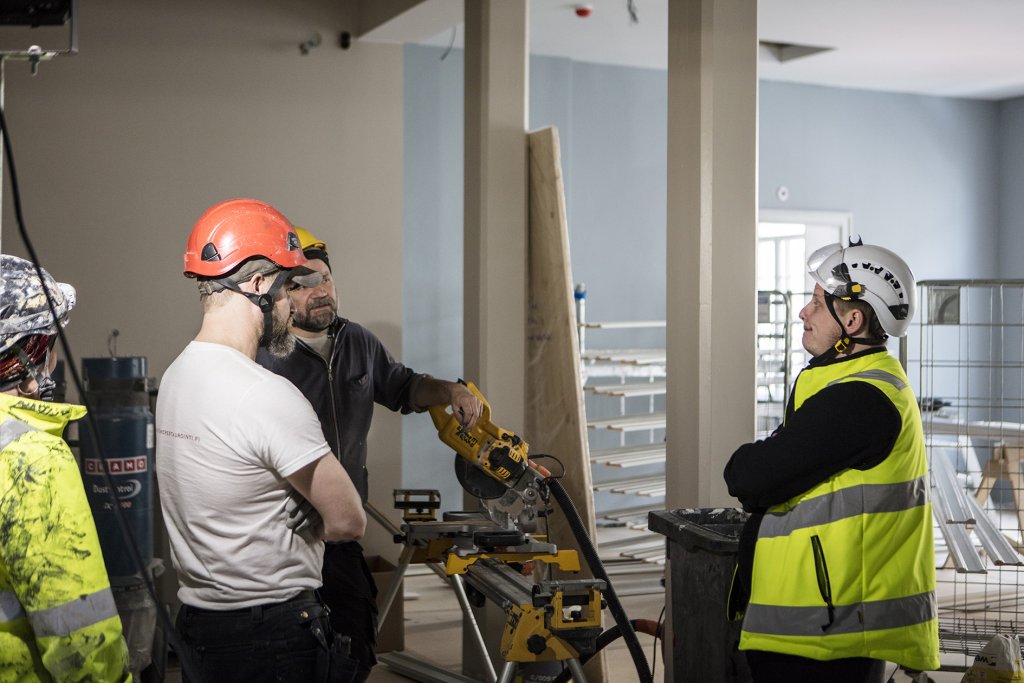 It is perhaps a bit symbolic that Jaatinen left his position as chief supervisor and started parental leave one week before the renovation was completed.

“And it’s been great to realise the future purpose of this house along the way. That gives hope for the future.”

The text is based on the report of the history of Puistokatu 4 building and its architecture , prepared by Livady Architects and Aalto University researchers.

See also: Anna Herlin’s blog text about the early days of the Puistokatu refurbishment, documentarist Virpi Suutari’s video and articles by Kimmo Oksanen for Helsingin Sanomat newspaper in 2020 and 2022.